The SERP Features Monitor provides an opportunity to take a deep dive into how often URLs are chosen over time in Google desktop and mobile search results for these SERP features:
The data provided in this tool is based on the campaign's tracked keywords and search engines. 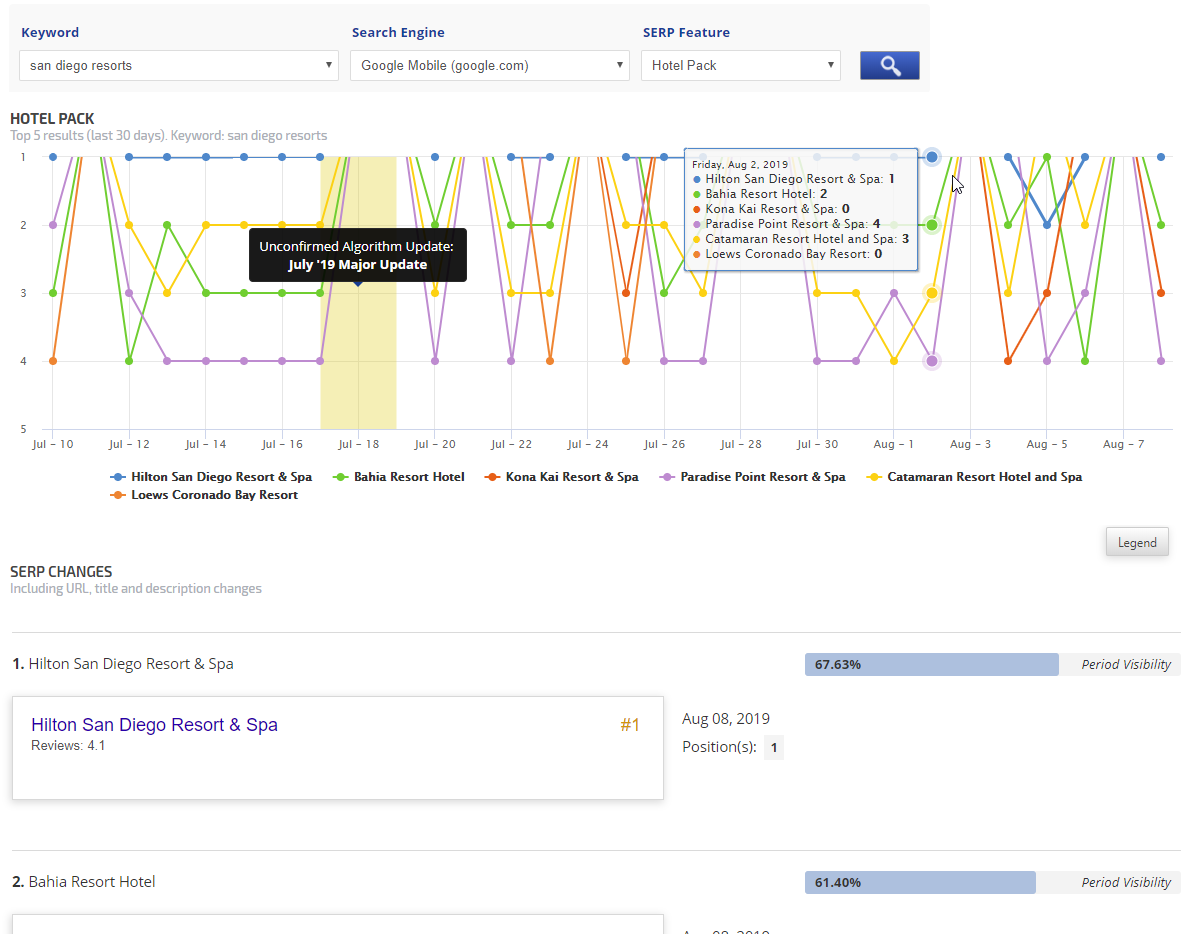 Select a SERP Feature, Search Engine, and Keyword and click the search icon.

SERP Feature Chart
The SERP Features chart displays all the sites that are displayed for the selected keyword and SERP feature during the last 30 days. 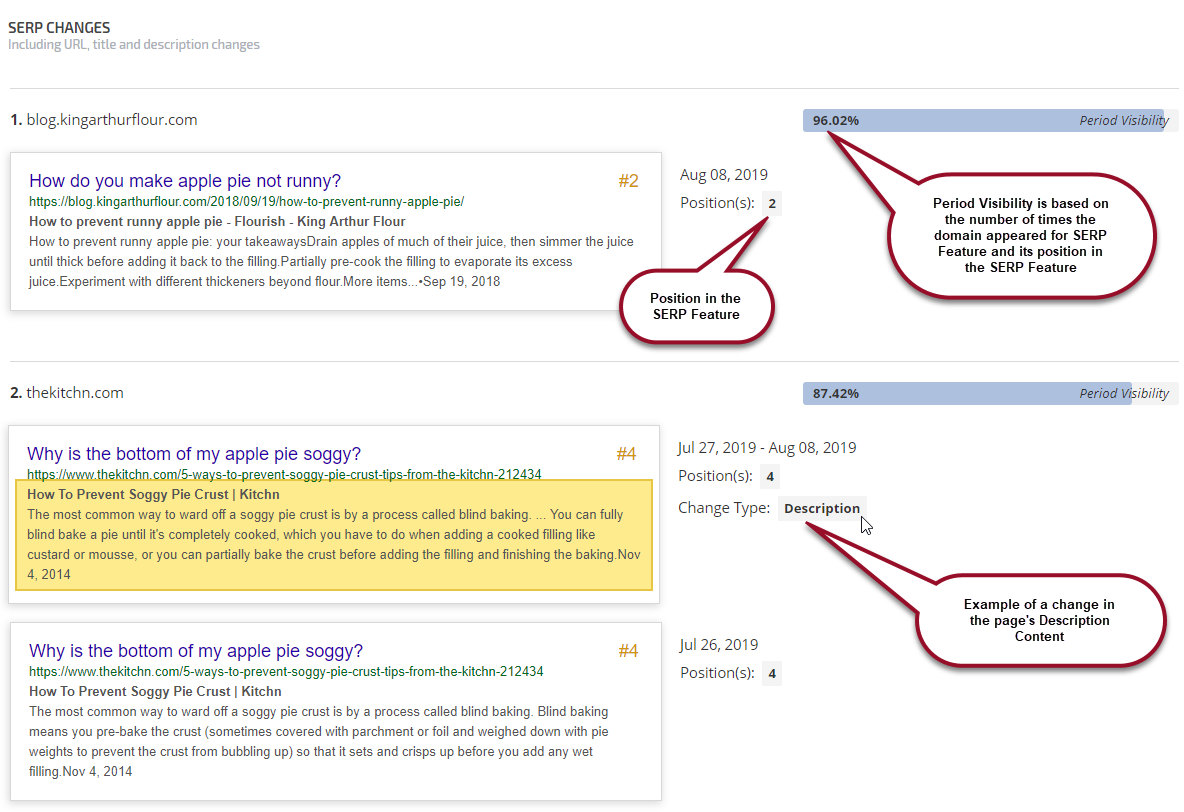 SERP Feature Not Found
If your search does not result in a report, then try a different keyword, search engine, or SERP feature. You can also check the campaign's Rank Insights report (in the same SEO report section) and select the SERP Features option to see which of the campaign's keywords are resulting in SERP features.

What does the report indicate?
In this example, we've selected the keyword "new york times best sellers", the Google desktop search engine, and Featured Snippet. The chart displays different colors for each site and plots the dates on which those sites were found in a featured snippet for the search phrase. The SERP Changes section indicates that during the last 30 days 3 sites appeared in a featured snippet for the keyword:
During that period Google did not serve a Featured Snippet 32.26% of the time. 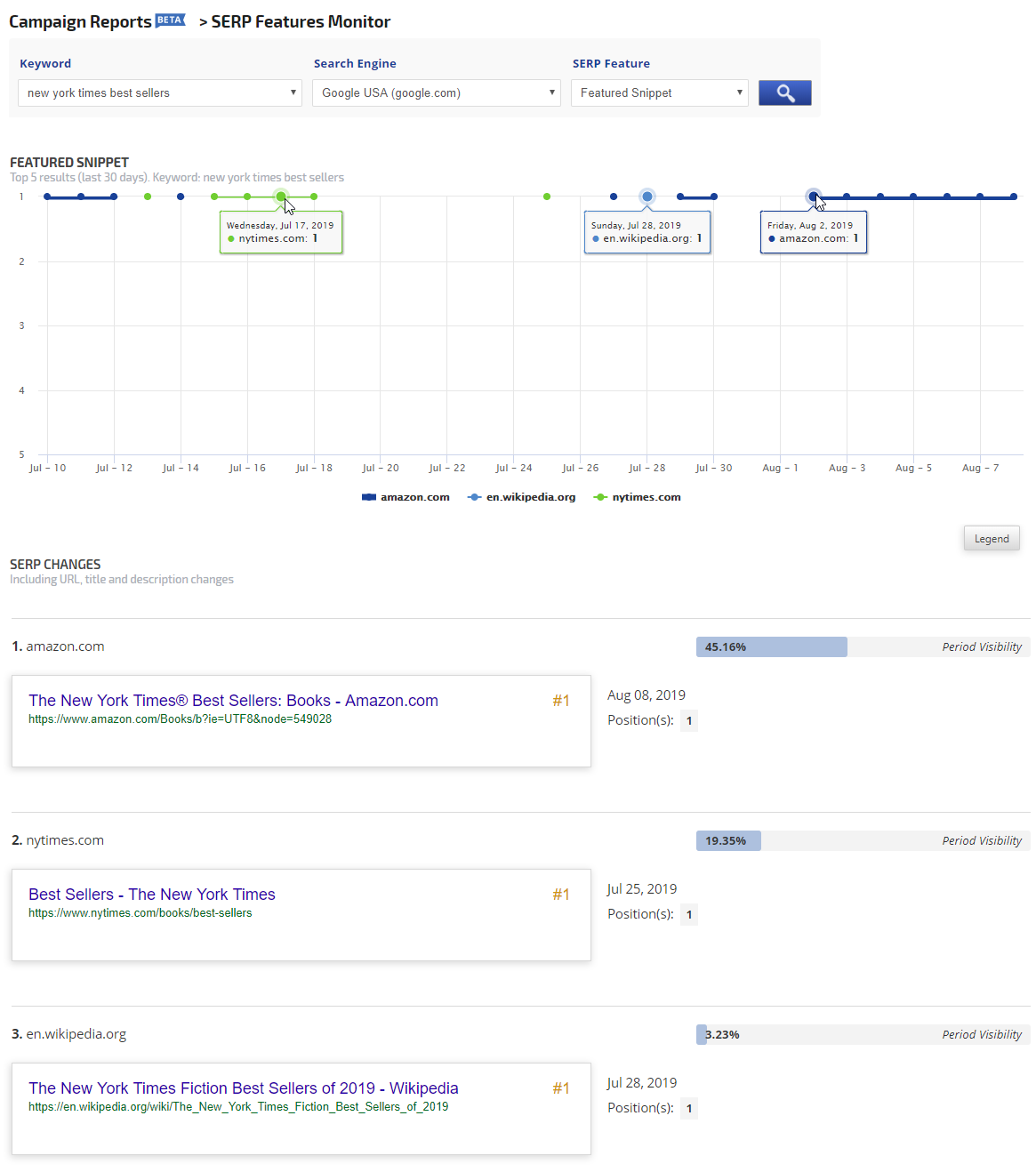 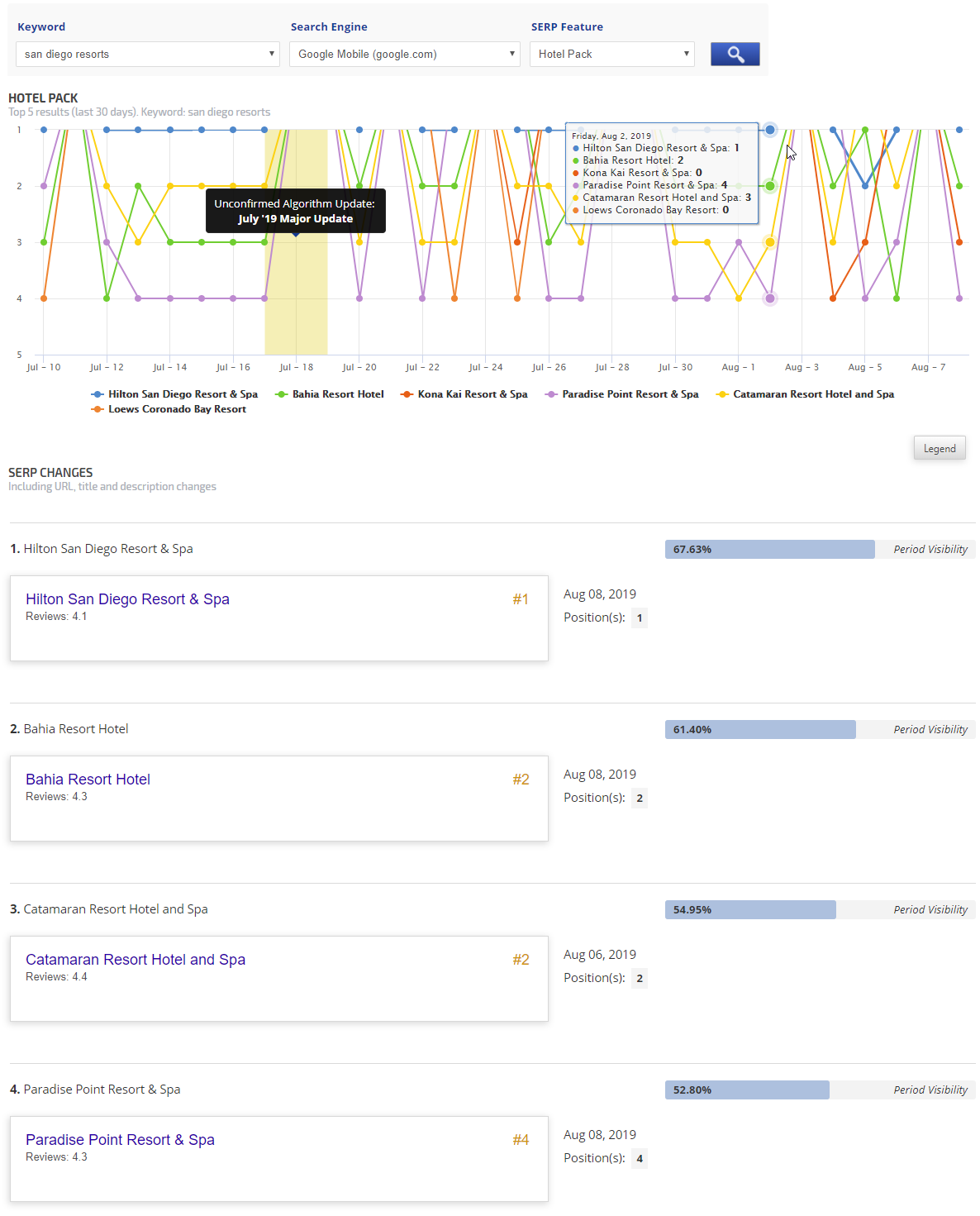 Analyzing Competition for Local Pack Position
If ranking in one of the three positions available in a Local Pack is important for your local business, the SERP Features Monitor can help you determine which sites are consistently in the Local Pack and how often Google is switching between the domains it ranks for those coveted spots. 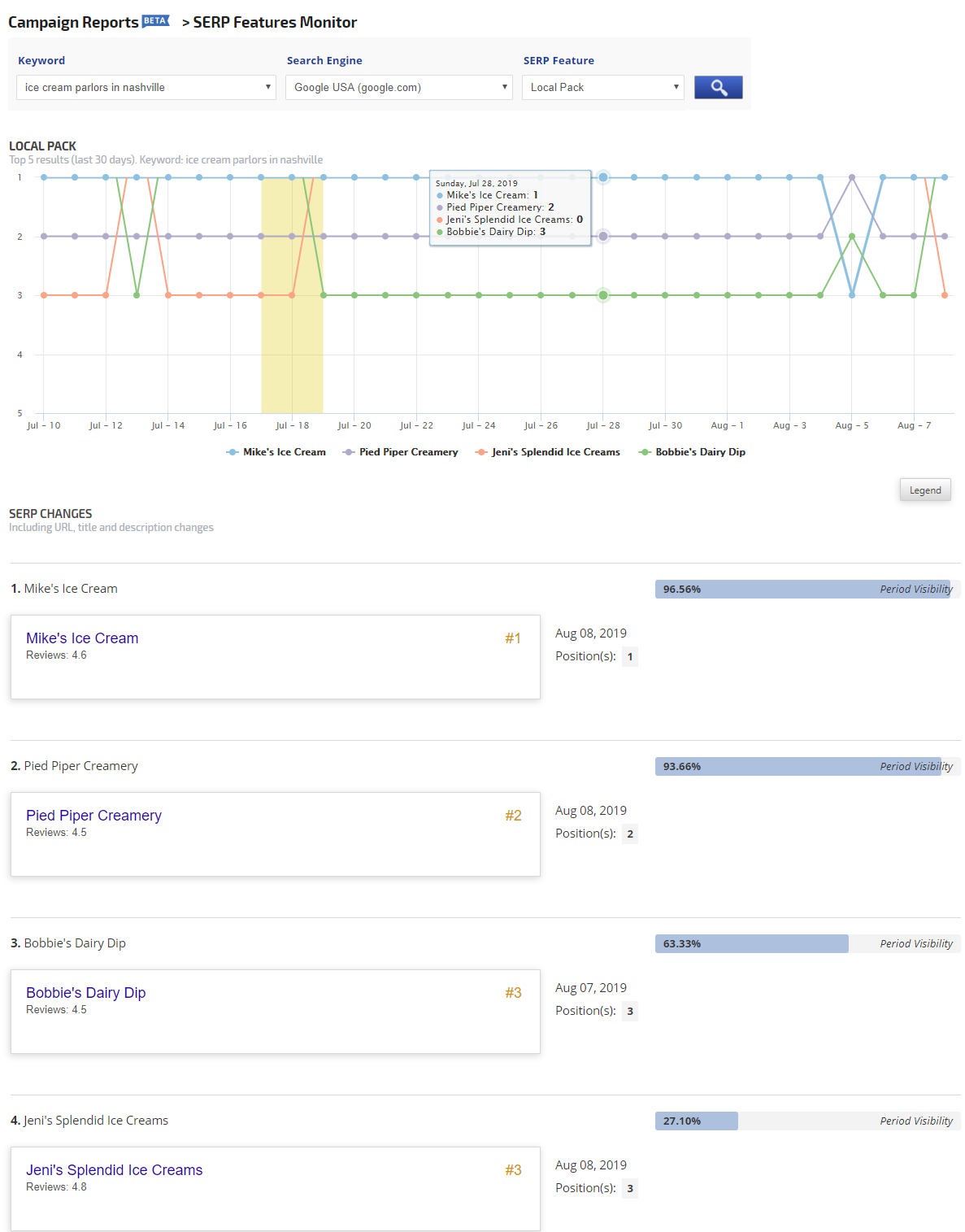 Best, Popular, and Similar Product Carousels
In this example, we're viewing the Product Carousel (Best Products) feature for the keyword "food processors". The graph displays competitors for the top 5 SERP positions that had products in the carousel. Below that the SERP Changes report provides the detail of carousel positions and changes (such as price) between dates. 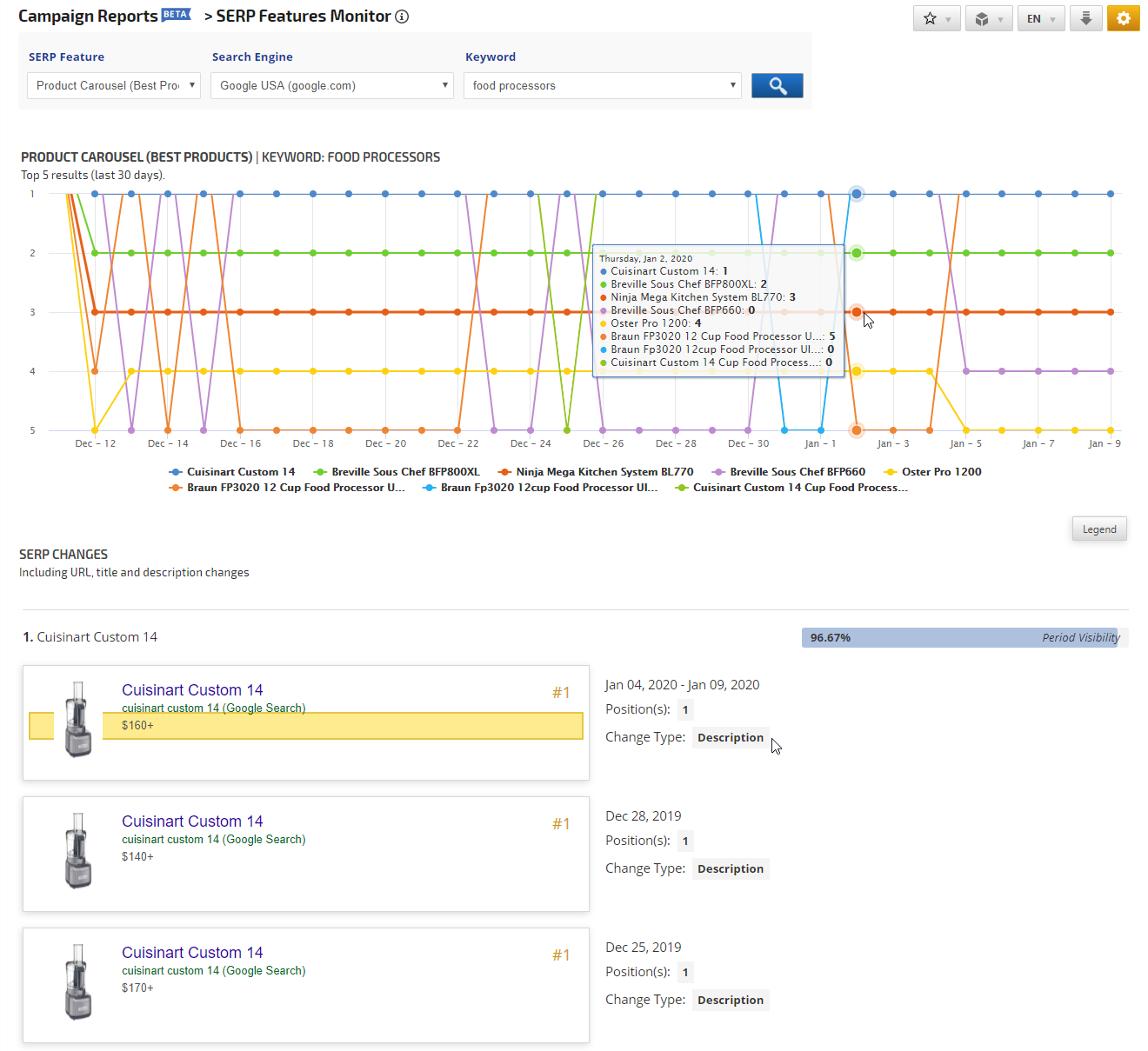 People Also Ask
This is one of my favorite SERP Features, a gift from Google that seems to keep on giving as it expands to provide more and more answers to questions.  In this example, the keyword "how to make apple pie" is tracked on Google desktop and the Related Questions SERP Feature was selected. 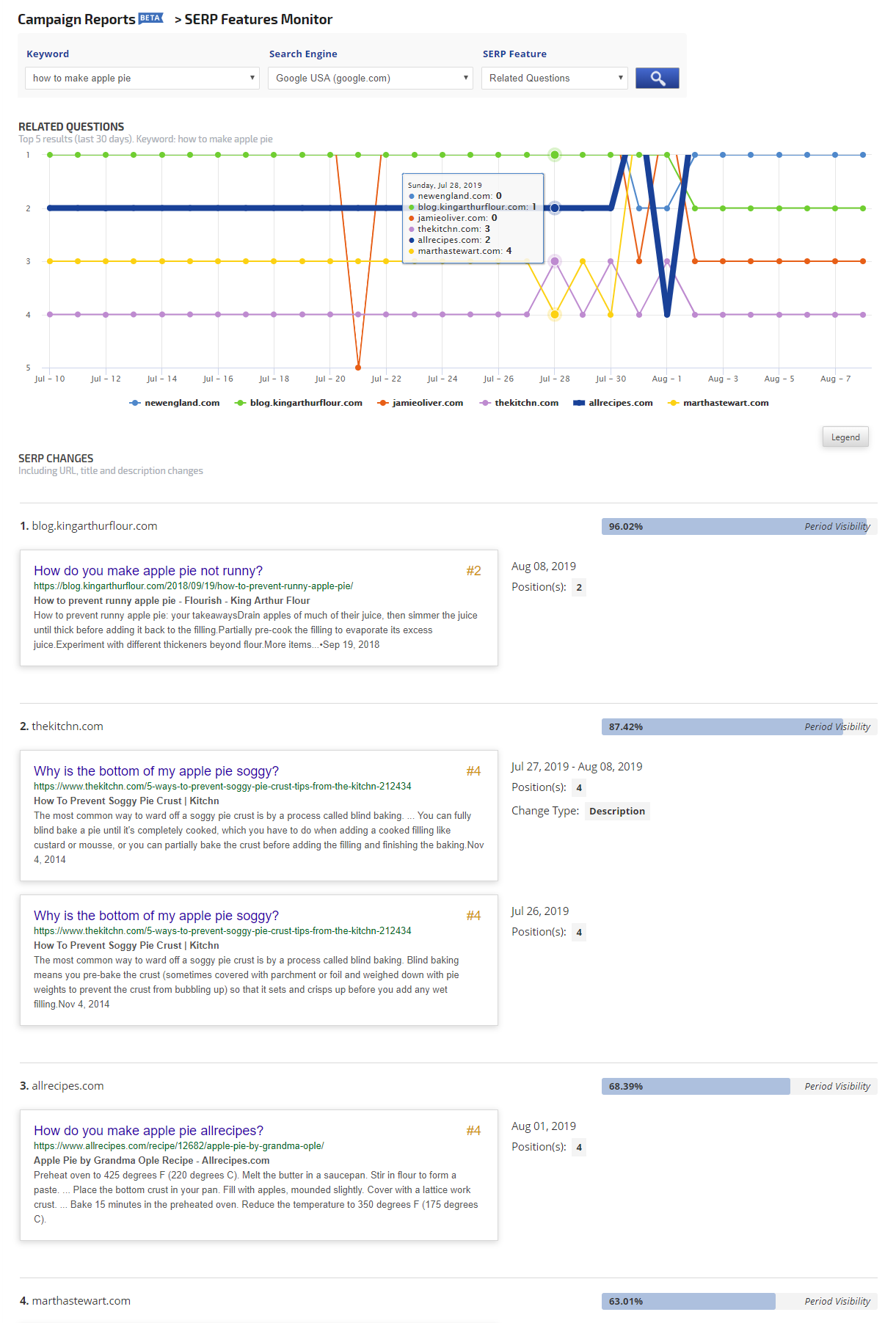 Keyword News Trends
In this example, the Top Stories SERP Feature was selected for the keyword "electric sports car" tracking on Google desktop. The results included 32 websites that appeared in the Top Stories box in the SERP during the last 30 days - too many for this screenshot, but a wealth of news data for anyone wanting to analyze Google's news feature for their product, service, hobby, etc. 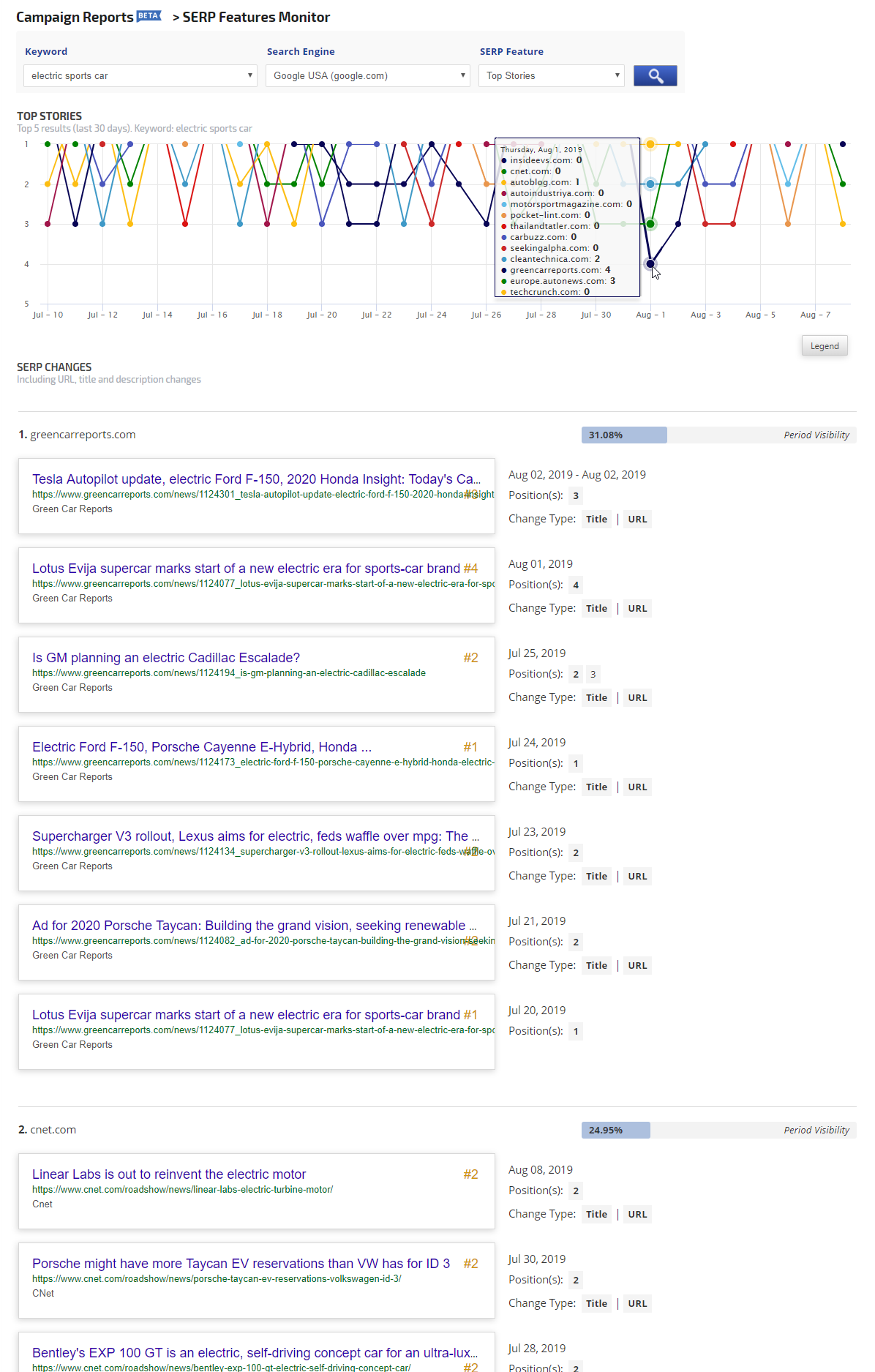 Which Videos are in the SERP?
The SERP Features Monitor provides title, URL, and YouTube channel name when YouTube videos are displayed in the search results. In the example below, the phrase "what is the best home security system" was tracked on a custom location-based search engine and we see that 10 YouTube channels competed for a spot in the video box during the last 30 days. 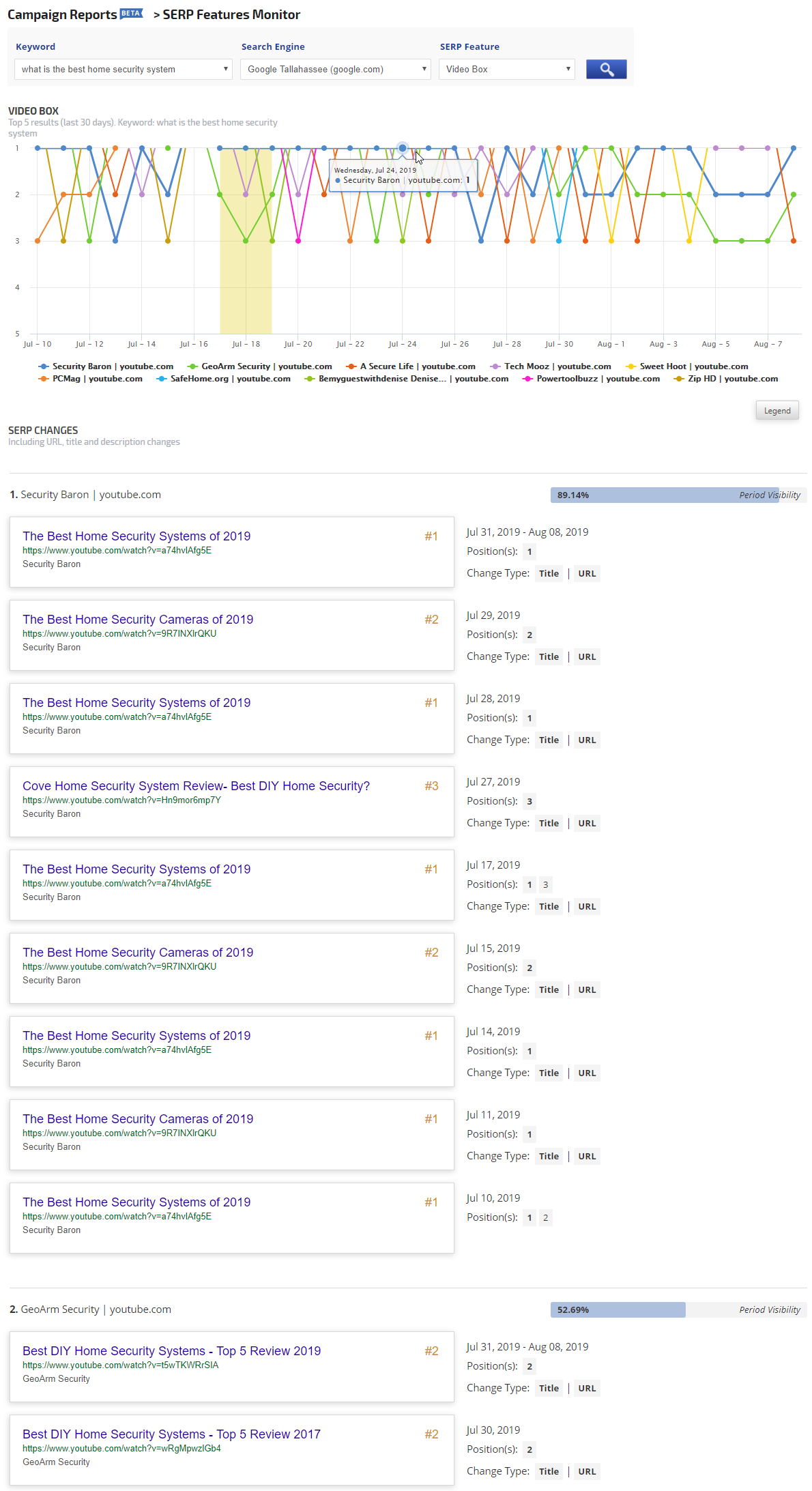 Which Web Stories are in the SERP?
The SERP Features Monitor provides title, URL, and domain when Web Stories display in the search results. In the example below, the keyword "los angeles" was tracked on a mobile search engine and we see that the data for the 5 competitive domains during the last 30 days. 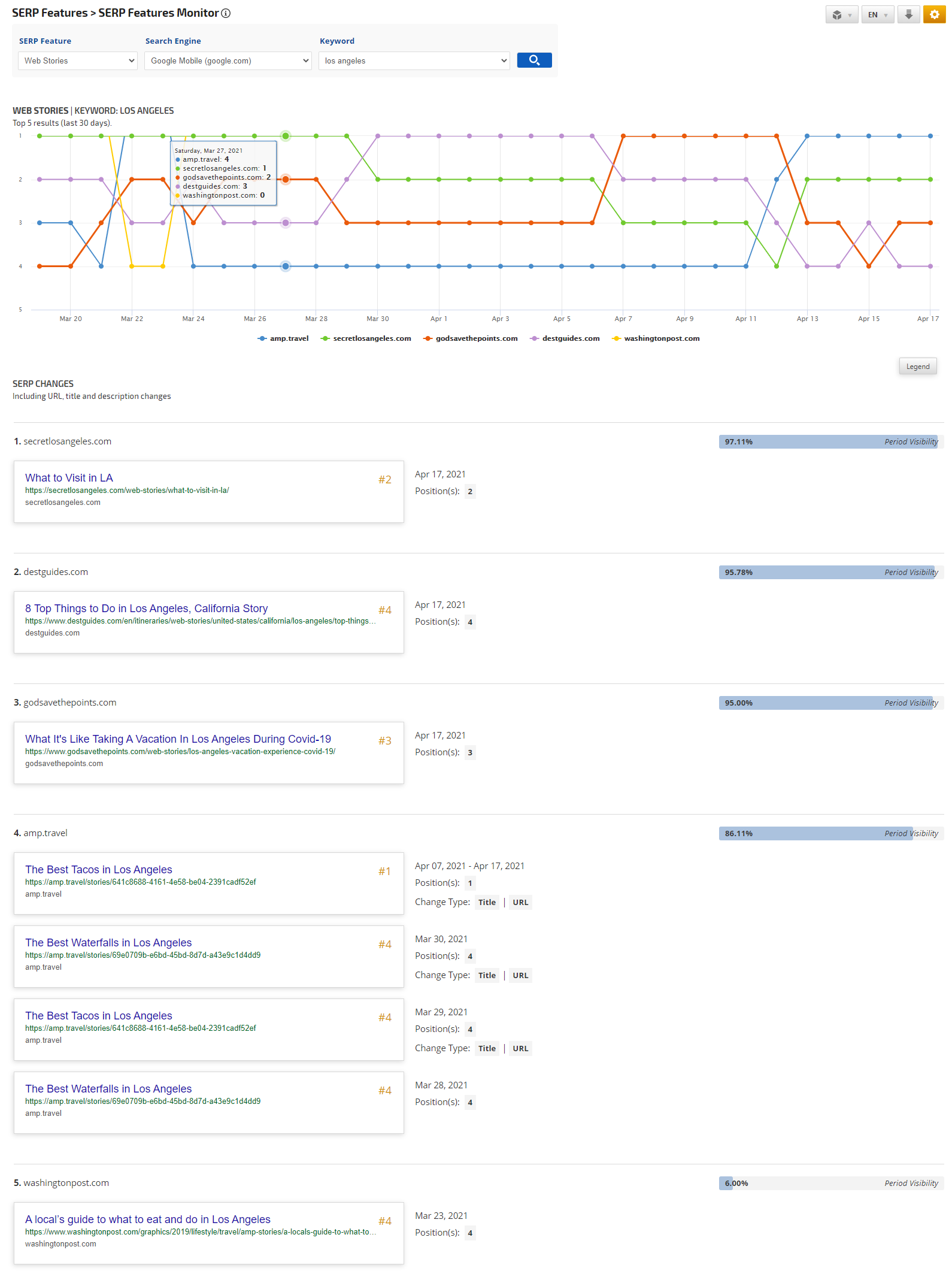